So sad to hear of the passing of Duncan Osborne.  Founding member of Simmental Australia.  Duncan personally viewed Simmental in New Zealand in 1972 when he selected 14 females with calves to come into his Buckingham Stud NSW. (click photo for details).  Several traditional Simmental females come to mind.  The elite Buckingham Olga (Sterling Parliamentarian), Buckingham Mamie (Buckingham Imperial),  Buckingham Lithe (Wendale Hornblower), Buckingham Onyx (Scottish Neff), Buckingham Poppy (Buckingham James), Buckingham James (Hockenhull Magnum) and Buckingham Usher (Buckingham Oz) to name a mere few. Early bulls used included Scottish Prinz, Scottish Neff, Beat and Hockenhull Magnum.   Duncan bred high quality Simmental cattle at his Buckingham Stud, as noted by the leading Studs in Australia who purchased the genetics that came out of the herd.   Duncan was a noted supporter and believer in the Annual Simmental Sale at Albury and worked very hard on the Simmental Committee to promote the breed and the Sale.  He had a vision.

For several years Duncan has been blending and breeding Black Simmentals with Ian Carey as Stud Advisor.  Noted that Buckingham Black Hamilton topped the recent  Inaugural Simmental Advantage Sale on 3.4.2014  Albury event.  Buckingham Black Hamilton is sired by Buckingham Black Fergus and we note TLC Lizzy and Ashby Estate Boris in the pedigree for muscle and performance.  Hamilton sold to TLC Simmental Hoskintown. (19 mths)  834 Kg   126 EMA  IMF 3.2 and 40cm scrotum.  A nice type of bull. The strength and workablility in his line of Black Simmental came from a powerbase of some of his earlier known traditional Simmental.  For example, Hamilton carries the superb qualities of CNS Power Source 070K  with the workable genetics and power from Denham Court Feral Cheryl, who again carries the genetics of Buckingham Mamie.    This is a key factor in the success of his Black Simmentals.  Designed to work in Australia under local conditions and perform.  Easy calving and growth.

Sympathy to Roslyn his wife who stood by a man who did so much for Simmental in the past, and for his dreams of the future of what Simmental could be.  A powerful and unwavering love of Simmental. For the breeders lucky enough to have Buckingham genetics, bask in the knowledge that there is a history, workability  and dedication to these genetics.

I recall and will remember Duncan at that Sale in April at Albury, a proud man with a dream to promote the breed and get things moving by going back onto Committee,  it is now up to the breeders to continue that challenge.  What a high note to have been on the foundation of the breed, to have bred some of the best, to have taken broad ribbon on the Show circuit  and had the future view on utilization  for the breed. 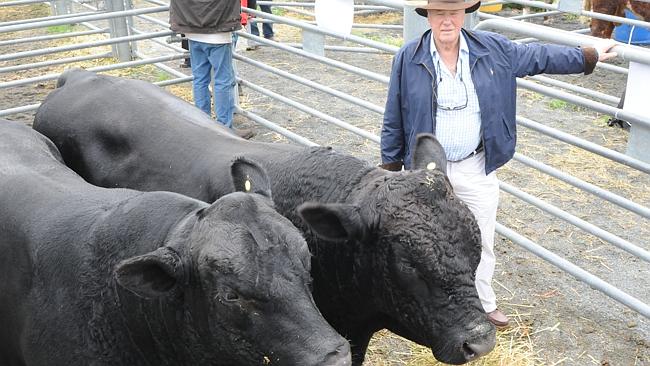 Photo of Duncan Osborne 3.4.14 at the Simmental Inaugural Advantage Sale Albury.  His black Simmental bull Buckingham Hamilton (on the right) topped the sale.