Attending the famous  Brenair Park 2014  sale we purchased two heifers for our poll  program. Click heading for detail and photos.

The Brenair Park bulls were superb with Lot 1 Easy Rider going to Russell Nowland.  Congratulations Russell. Highest selling bull. A pedigree rich in muscle, style, flambouyance and correctness.  Several bulls that Don Mathieson presented were a Stud breeders dream.  It was a great day with the new lads presenting devine tie up cattle on entrance. With cattle master, Ken and Kay Batt overseeing the operation as usual.  We were after heifers and were delighted with the quality.  No Brenair Park heifers were available on the day.

We selected two heifers from Greg and Jeanette Huggins, Mt Egerton, particular Stud breeders seeking performance and quality. They are all Australian Genetics…… Both heifers are moderate framed, thick and poll. EBV’s are balanced which we really like. Both sired by Peter Schembri’s Maverick Endo. A bull purchased by Jeanette and used extensively in the herd for poll, structure and performance.  Dandavjon Poll Danendala is from the high selling Langton-Gate W122 (>$8,000 total) carrying several desirable Dunmore lines, in particular Dunmore Wilma. First female from W122 to ever sell.  Soft, low birthweighs and easy doing.  The second heifer selected is Dandavjon Poll  Dorenda. Out of another high selling Brewers Coralie W276 (DNA correct). The line tethers to Kellyview Paul (Mel Ryans favourite bull) and from Bill Daveys cattle, Lemah Park Joke Joyce.  On the dams side the superb Stud and Commercial prospects of the Judy Brewer’s Coralie line.  This line was based from the original Lyall Cooper’s  Boundary Bend Coralie. These cattle test well for Genomics. The heifers were selected after a study of the lines because they carry parentage of  Simmental  that are tried, tested and work.  We look forward to these heifers calving to one of the best muscled young poll bulls that has ever walked the paddocks at Ten-Rose. 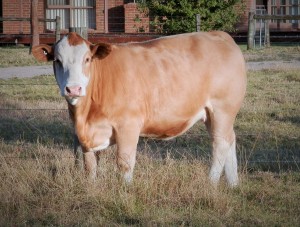