Bar 5 is one of the most successful and unique cattle operations.  Based in Canada.  Created on 26th August, 1969 by cattlemen who had a vision.  The Bar 5 membership number #765 hangs in the doorway of the Bar 5 Office.  It carries the signature of President Mr Travis Smith and Secretary at that time, Mr Fenton Webster.  The Canadian Simmental Association was founded in 1968.  Bar 5 was one of the early members. 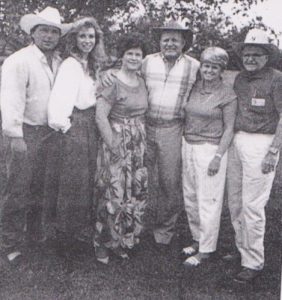 Ted Pritchett gives an insight into the Stud from his 1994 discussion.  “The Stud was a well run operation.  The feeding system designed to do the job effectively and efficiently”.  For the severe snow conditions of Canada shelter was engaged by the use of hollows in the ground and natural trees as windbreak.  Lots of fresh bedding. 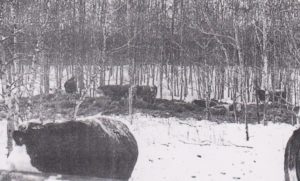 Fullblood, Purebred and commercial cattle were managed on good quality hay over Winter.  The Agribition Grand Champion and other successful cattle were present on that visit in 1977.  The property grew excellent hay with the water table being just over 2 meters down.  Bar 5 at that time consisted of 9,500 acres.  Sections near Shilo, Two sections near Brandon Manitoba and the balance near Douglas.

Ross Thomas Donn Mitchell and Bob Gordon got to talking about investment and cattle and at Bob Gordon’s house in 1968 they decided to work together and keep it down to five cattlemen.  Bar 5 was incorporated in January 1969 and ran over 600 cows. Mac Draper was involved in the expansion of he Stud.  Parisien sired some of the early cattle bought in. The trip to South Africa around the 2000 era saw a new Bar 5 Established in South Africa with Abraham of Toverberg Simmentaler managing the operation.  Peter Massmann assisted the operation and I think at that time Fred Scheutze of BHR Texas was present on that trip, alongside Jeff Knox of Knox Farms Australia.  These men were the pioneers of bringing the genetics to the world.

Greg and Ron Nolan looked at the 15 lines utiized by Bar 5 from South Africa.  Greg looked at Pedigree, Information and Eyeballed the cattle.  Ai Ai Siska rates high along side the J and E cows.  We noted the style, the class and the dark pigmentation.

For Australia Bar 5 has meant the access of South African genetics, early on in the piece.  They have given us from Austrian and German genetics the “choice” to select types for varying programs.

Bulls as Bar 5 Paymaster, the polled bull who gives easy calving, fabulous temperament and growth,  Bar 5 Piona, the superb all rounder, Bar 5 Burner a wonderful bull that has bred on and all the rest of the outstanding cattle that is Bar 5.

For us in Australia we say thank you. 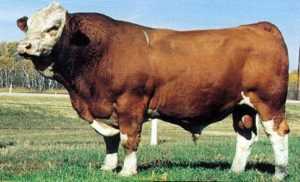 Bar 5 Paymaster.  One of the most remarkable bulls, he fits with todays market. Bar 5 Pioneer, one of the Siska lines.  Excellent bull breeding on in Brazil.