Ashley Adams Simmental Breeder from Darracourt Queensland fell from his quad bike Tuesday 17th, March 2015 with tragic outcome.  (Click photo for full details).  We have known Ashley for many years and have been involved in his quest for Beef Tenderness and High Quality Beef.  Ashley loved Simmental cattle because they produced the best beef quality with the least feed intake for the harsh area of Blackall where he lived.  The property in Central Western Queensland would be one of the most challenging areas in which to farm. Drought and floods are common.  Dust and flies the norm.

Chris met Ashley after the dispersal sale of Dr Richard White’s Auscan (Simmental) Dispersal Sale in South Australia. Ashley had secured some handy Simmental cattle. Chris & Ashley were all  in a car with Ben Finch (Elite Cattle Auctioneer)  going out to the Airport after the sale.

It was a remarkable journey,  with a person who was inspirational on several levels.

Born 12.10.1955 he was one of six children.  His father Phillip lived to 96 years passing in 2013. Phillip was always an engaging man with a passion for the land. Darracourt was one of several Stations running Simmental, Santa and Brahman. A large land holding, some say up to 158,000 acres. Ashley’s grandfather was an elite boxer, Ashley said he felt he inherited “an incredible reflex action’ from him and that is why he was such a sharp shooter.   Number 1 shooter in the Swiss Open 2002 & 2003. Gold at the Olympic Games, Korean Cup, Australian Open and World Cup. Attending several Olympic Games he was about to lead the Australian Shooters Olympic Team in Brazil 2016, the team is devastated. It will be an emotional event as they will shoot for Ashley.

In 1982 Ashley had a serious motor bike accident whilst racing, paralysing him waist down. This never stopped him from doing anything and in fact made him more determined to “get on with it all”.

Ashely set up an operation that involved his Trade brand “TendaBEEF”  the cattle he bred had a DNA marker of particular T markers that bred Tenderness into the beef.  This was a non lysosomal approach that meant the product could be used earlier as you didn’t have to wait for extended hanging or vac packing.  Murrinstone Auscan a Simmental bull carried the full T1 to T4 markers that passed through into his sons. The bull also carried high Marbling and Feed Efficiency, so this bull suited the TendaBEEF genetics well.   Ashley never wavered from the original GeneSTAR genomics created by Dr Gerard Davies.  These bulls (progeny of Auscan) were then distributed to many satellite operations in order to reproduce,  grow on and give a constant supply of high grade beef. The local markets bought up this high quality beef and it was supplied to events and outlets, requiring top grade beef. DNA testing thousands of cattle in order to find the best. We got a smile out of the fact that Brahman breeders would purchase Simmental TendaBEEF from Ashley when they had special occasions, that required tender beef.

Ashley had been working on many export markets in particular Japan and making huge inroads. This was recognized by his many Agribusiness awards.

Of course Ashley’s favourite food was corned beef and potatos and the odd Bundy and Coke.

The cattle that were bred, performed exceptionally well in the Lot feed situations with daily weight gains of 2.6Kg with conversion of 4-8Kg on a dry matter basis.  Top performers could put on more than 3 Kg per day.  At times being penalized for his cattle being over weight……….the muscle was bred into them, not fat, but muscle.

What a privilaged time we have had, in the knowing of Ashley Adams, friend, industry leader, forward thinker, innovator, driven, focused, determined, inspirational ideas man and Simmental Breeder. We will miss him and his thoughts on the future of the beef industry and how Simmental fit the picture in an unquestionable mode.

We will remember his passion for Simmental and the land.

Our thoughts are with Iain his son.

Thank you to Marty Rowlands K.B.V. Simmental Queensland for your phone call.

Darracourt Simmental Stud.  Photo of Iain (son) and Ashley Adams with the “Bundy” . He sent me this cheeky photo one Christmas.

Ashley was into the Trademark TendaBEEF that he created. 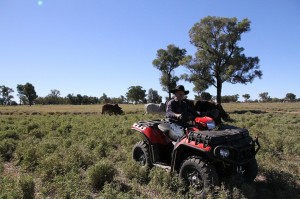 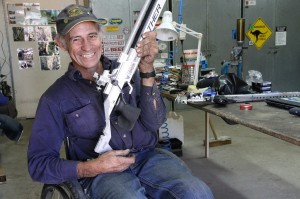 Ashley the crack shot in his “office”. Olympic champion.