Cattleman Peter McWilliam who was the Manager at Harry M Miller’s Dunmore Stud Manilla New South Wales has been breeding various breeds of cattle.  His current Pustataler venture notes a rare breed of cattle. Based in NZ for many years.

Saving a rare breed of cattle has become a hobby and a passion for a Wairarapa beef breeder. Kate Taylor takes a closer look. 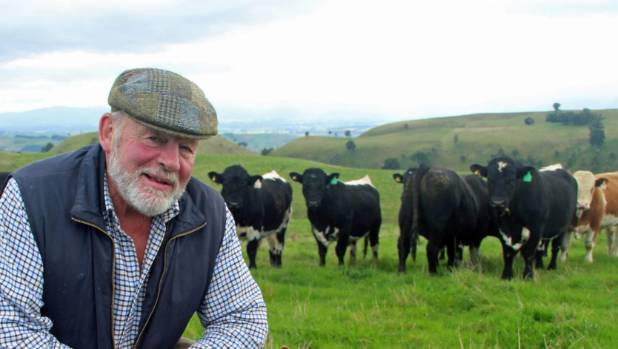 Peter McWilliam from Maungaraki Cattle Company near Gladstone, Wairarapa, with some of this year’s sale bulls.

A desire to stop the possible extinction of pustertal cattle has seen a fourth breed of cattle added to the line-up at Maungaraki Cattle Company.

Peter and Sue McWilliam’s Maungaraki Cattle Company can be found in the limestone ranges near Gladstone, south east of Masterton. They have gelbvieh, angus and simmental cattle as well as pustertal from south Tyrol in the Dolomite Mountains of northeast Italy. There are only about 400 purebred pustertal females in the world.

“There is a small herd in Australia, one in South Africa and one here – the only ones outside of Europe. Yes they’re a hobby for me and a bit of a passion now, but it’s also about preservation. Should there be a catastrophe in Europe, such as foot and mouth disease for example, at least there are a few herds around the world where we can keep the breed going.” 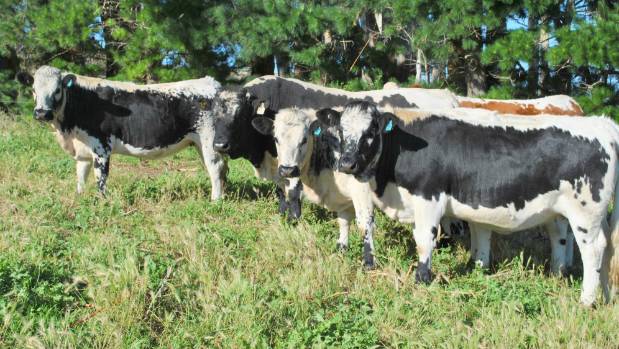 McWilliam says the alpine breed might also have a purposeful future in New Zealand. 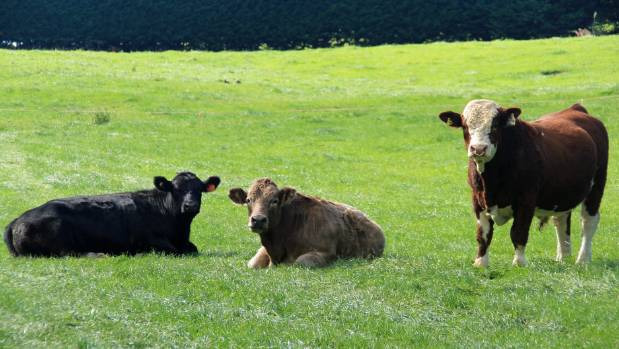 A simmental bull destined for sale at the 2017 Beef Expo with two Future Beef steer entries at Peter and Sue McWilliam’s Maungaraki Cattle Company near Gladstone.

It all started at school for beef ambassador

“For a variety of reasons, traditional beef cattle herds are being pushed further and further into tougher hill country. We are already breeding different cattle to 20 years ago for that very reason. These cattle might be the answer in the future… they could be of great value in challenging conditions.” 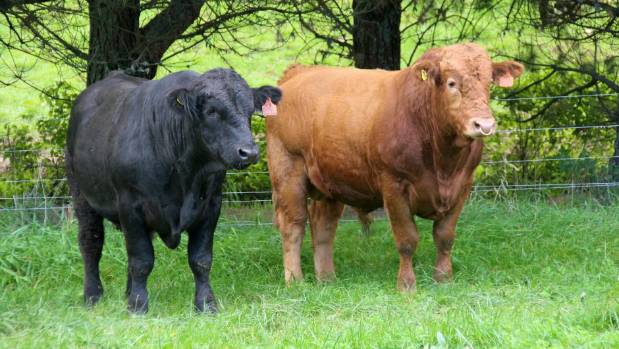 The cattle stamp their progeny with a distinctive white stripe down their back including the tail, while the body is black or red.

McWilliam remembers the first time he saw the breed in Italy seven years ago.

“We were wondering if we were going to find any and then we came over a brow and there they were grazing in front of us. It looked quite magical really, these pustertal, simmental and brown swiss cattle and some halflinger (native mountain ponies) spread over the valley.”

Later, the McWilliams found some pustertal females at an artificial insemination (AI) quarantine centre in Munich.

“They had some donor cows there from Tyrol and we negotiated buying 15 embryos and semen from two bulls initially. We got six progeny from the embryos – two bulls and three heifers. We kept the two bulls and used them extensively over the following years commercially as well as over the purebreds.”

“We imported more semen after that. The genetic pool is so small it is hard to get new lines.”

The current Maungaraki pustertal sire is El Toro, who was from the original embryo importation.

“Sadly he’s no longer with us but we do have his semen for sale as well as his progeny.”

The couple hope to go back to Europe in the next two years to source more unrelated donor cows with a view to importing more embryos. But in the meantime the national Beef Expo is the next event on the calendar followed by private bull sales starting on their Gladstone farm from mid-May.

“It sounds Mickey Mouse but they’re great bulls,” he says.

“They’re selected on the same criteria – structurally sound, fertile and showing all the production traits you would expect. Basically they are good hill country cattle. We put the same criteria on our cows and expect them to get in calf as two year olds.”

“We cull strongly on temperament. Gelbvieh would be best known for their docility.”

Maungaraki carries 50 angus stud cows and 30 pustertal and pustertal-cross cows, while daughter Lauren and her husband Richard Cameron took over the gelbvieh female herd two years ago. The 40 gelbvieh cows can now be found at the Camerons’ property at Mauriceville, just north of Masterton. They farm a 200ha Cameron family farm on their own account and Richard also manages a bigger property next door, while Lauren works for Beef + Lamb NZ.

“Lauren always had a passion for the gelbvieh cattle and was keen to help promote the breed and expand the membership. They look after the stud cows and any bull calves with potential for breeding come back here as weaners and I bring them up with the other sale bulls.”

McWilliam started the New Zealand Gelbvieh Society in 1990 and was president for 12 years, taking a break to be president of its simmental equivalent, before returning to the gelbvieh’s top job four years ago.

“We’ve just had the AGM here at Maungaraki. The camaraderie among members is amazing. They’re a tight-knit bunch of dedicated breeders from all over the country.”

He says the past year has been a good one for gelbvieh with Meat and Wool Cup wins at the Royal Show at Hawke’s Bay, the Horowhenua and Masterton A&P shows and throughout Waikato. A Maungaraki gelbvieh-cross steer entered by Lauren also won the overall reserve champion ribbon at last year’s Hoof and Hook competition at Beef Expo.

It hasn’t always been gelbvieh close to McWilliam’s heart though.

He had been managing a simmental operation in Australia and Sue was a polo groom. After doing their own thing for four years they did a three-and-half-month world tour to as many beef-producing countries as they could using a lot of their simmental connections.

“The plan was to know every simmental that would suit New Zealand conditions. I became a stud stock consultant in Australia and overseas (based from New Zealand) concentrating on simmentals and visiting Australia, the US and the UK three to four times a year. I made more money consulting than I ever did farming,” McWilliam says.

“We were offered the opportunity to start a small herd in New Zealand with the help of Sue’s family, the Wallaces at Alfredton, who had a dozen cows. That was where the name Wai-iti came from. We built up the herd by importing live cattle as well as embryos and semen from the same source as a client in Australia.”

Sue’s family trust helped with the purchase of Maungaraki in 1986 and they took over the debt in 1996. But the Wai-iti Simmental Stud was dispersed in April 2010 just a year after the McWilliams won the Best of European title with a simmental steer at the annual Steak of Origin competition.

“We were finding it difficult to sell enough bulls so we had to make room for the angus and also the gelbvieh, which were both selling well at the time. We couldn’t sell the older cows so we kept them in the herd and they are still producing now as 16 or 17 year olds. Those progeny sell under Maungaraki Simmentals while the angus and gelbvieh have a Gladstone prefix.”

McWilliam is president of the Masterton A&P Society.

“I am passionate about the A&P movement. It should have more relevance now than ever because of the increasing disconnect between rural and urban people. Our challenge is to make the local show more appealing and relevant to city and townspeople and encourage them to take some ownership of their annual event and become more involved helping run and organise a fun and educational day out.”

The interest in cattle goes far back in the McWilliam family. Peter’s family was originally from the Black Isle in the northeast of Scotland where his great, great grandfather, James McWilliam, started breeding pedigree cattle in the 1850s.

Lauren looks set to carry on the family tradition, while Peter and Sue are starting to downsize. Maungaraki has halved in size with 100ha sold to neighbours David and Pip Blackwood of Hinewaka Shorthorns two years ago.

“We wanted to get rid of debt and I also wanted to slow down a bit, having got my gold card, but it hasn’t happened yet,” he says, laughing.

McWilliam does some work at Taratahi and helps the students prepare their steers for Future Beef, which is held in conjunction with the Beef Expo in Feilding.

“We love using the farm as a venue for upskilling people who are interested in it,” he says.

“We have 110 second-year vet students from Massey here for a week each year to become familiar with handling large animals. We’ve also been involved with upskilling some MPI field officers, such as former fisheries officers who are now expected to be able to handle animal welfare issues as well.”

For the past eight years, McWilliam has also been rearing 250-500 bull calves a year in partnership with son Willie, who owns a crayfish business, which Peter and Sue have also invested in.

“It’s a bit different to farming, but you pay for a quota the same way you buy a farm.”