Malcolm Fraser,  Simmental breeder and past Prime Minister. Click photo for details.  Prime Minister of Australia from 1975 – 1983.   John Malcolm Fraser was born in 1930.  His grandfather immigrated from Canada.  Malcolm’s father Sir John Fraser had studied Law at Oxford and was a Pastoralist in New South Wales -> later moving to Nareen, a cattle and sheep Station in Western Victoria.  Studies at Melbourne Grammer and later Oxford came before an illustrious career in Politics which began when he was 26 years of age.  Married to Tammy he has four children.

Photo on the front is that of Malcolm at Simmental House in Melbourne in the 1980’s.  Always interested in the land he bred Simmental from 1972 to 1996.  Thousands of cattle carried the Frasernareen Stud name.  The first Frasernareen female was registered in 1972 with Simmental Australia.  That cow was Frasernareen D195.  Her first progeny was a calf sired by Avoncroft Aster.

Frasernareen carried several high profile genetics in their Stud as Munga Park, Dunmore, Bar 5 and Piggott Range.  There was always an article in the newspapers about Malcolm and his Simmentals. One year at his sale, and they say the rail was lowered to make the cattle appear larger (which was required at that time – the bigger the better), an 800kg  bull lept the fence the same time as  Christopher Tippett and his wife Glenys were trying to get out of the way, resulting in fractured ribs from the latter.  Legal suit of $500,000 for the damages ensued and the story hit the media for weeks.  Frasernareen Mountbatten was the bull.  Interesting the old genetics the bull carried.  Some of the headlines got the story the other way around and the head lines read something like “Prime Minister Malcolm Fraser nearly killed by bull”  His son John managed Nareen for many years.

When the property Nareen, was sold, Malcolm retired to Merricks near Red Hill down the Mornington Peninsula in Victoria which is one of the most beautiful areas of the State.

Malcolm’s autobiography is a good read. 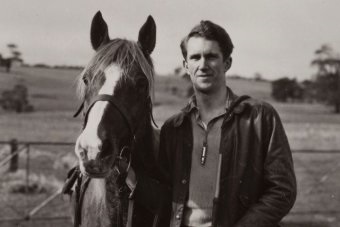 Malcolm at Nareen with one of his Simmental bulls, 1983. 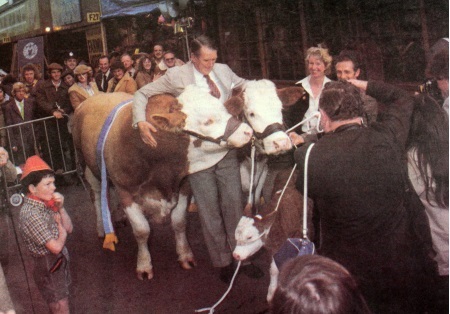 Malcolm at Simmental House, Royal Melbourne Show in the 80’s.

Malcolm with his Akubra hat on, in front of an old tank stand at Frasernareen Simmental Stud. Bill McAuley took this photo and it now hangs in the National Gallery of Australia.