Harry Maurice Miller born in New Zealand 6.1.34 passed Wednesday 4th July 2018 aged 84. An illustrious and saucy life, most noted for his breeding of Stud Simmental cattle at his many thousands of acres at Dunmore Manilla New South Wales.  Harry began working as a farmhand, joined the Merchant Navy, sold fry pans in a department store and left NZ in the 60’s to create one of the greatest entrepreneurial showbiz  & Simmental Stud business on record.  Harry even sold Holeproof socks saying “You have got to have AN EDGE” Harry bought people as Louis Armstrong, Sammy D Junior, Rolling Stones, Tom Jones, Mick Jagger, Prince Charles and Ella Fitzgerald to Australia.  He represented hundreds of people as Alan Jones, Frank & Kerry Packer, Graham Kennedy, Maggie Tabberer,  Lindy Chamberlain & Ita Buttrose.  Patrick White’s Novel “Voss” about a German adventurer formed the name for his noted bull Dunmore Voss a full brother to the remarkable Dunmore Hansa.  Voss is a sweeping ill fated tale of a great love story between Voss and Laura Trevelyan. Harry loved the book and wanted to put it into a movie. Harry said Patrick White found the book boring and needed to be “livened up”  Harry said to walk away from people who you have no respect for !  1976 saw the Computek conference in Pretoria Johannesburg for the Simmental meeting.  Appointed to the Australian Meat and Livestock Board, 1977 Knights Cross Order of Merit from Federal Republic of Germany for services to Agriculture AND promotion of German drama were but some of his accolades.

Harry and Wendy  Paul – Miller created Dunmore Stud so named after one of the previous owners. The Stud ran from 1975 – 1990). Outstanding Royal Show results highlighted the measured performance of the herd. Wendy a Vet designed an Ai & embryo program that saw their most remarkable female Sundowner Ranches Evelyn over $45,000 imp. (Scottish Neff) breed on a superior line that is still utilised today where superior genetics are required.  The Stud imported full blood Fleckvieh genetics for their pure line and applied these to Hereford in a massive upgrade program of hundreds of females.  Paul Quigley was a Manager at Dunmore, also Peter McWilliam (NZ).  Peter said it was not unusual for Harry to have 4 large trucks on the road carrying Stud Show cattle.  “It must have cost a fortune” he said.  Dick Vincent Hamelin Park said “The Stud was a milestone in breeding.  Dunmore Campbell and Hawkeye II have been the catalyst for this success.    David Emmerson Alva Downs said “The contribution to the breed has been unmatched – their record stands alone”.

Harry bred Simmental because their lean beef in fact does stand alone. The high beef quality is unmatched in any other breed, marbling, tenderness and feed efficiency.  Harry ran thousands of head of cattle at Manilla with a breeding Stud herd of near 1000 head.  They used the best breeding possible bulls of their time.  Dunmore had over 17 bulls listed as Trait Leaders with Dunmore Hansa listed as Triple Trait Leader for 200 day weight gain, milk 550 day weight.  The annual sales at Dunmore saw breeders attend from all over the world.  Harry said he put a lot of work into the marketing and gave leather diary’s with people’s name embossed in gold.   Harry said “The art of a deal is to sit there and keep your mouth shut”.  Andrew Denton recorded a lively interview with Harry on 30.10.2006 – worth a viewing. Successful dramas as Hair, Superstar and the Rocky Horror Show were managed by Harry.

One can list the names of cattle who took out several major awards all over Australia, but it is beyond the scope of this small paper today.  Most noted cattle will always remain as Sundowner Ranches Evelyn, Dunmore Hansa, Paton, Woody Allen, Woodstock, Atlanta, Sally Anne, Radar, Georgia, Ben Lexen, Cossack II, Goldberry, Maureen, Eureka Girl, Red Tape, Anna, Muffin, Falcon, Fenella, London Times, and Voss.  Each animal has its own remarkable story, the EBV data, the breeding and show record and the opportunity they gave to new Stud and Commercial cattle buyers.  Each Stud buyer has their own personal story as well which is just as interesting as Harry.

The two day final sale was held on 8th & 9th December, 1989.  You could arrive by plane on the Dunmore runway, or drive the very beautiful and unique roads to Manilla.

When I spoke with Harry he talked about the cattle and the remarkable ability of Wendy and the people around him and the Simmental Society.  He said he encouraged celebrities to go into breeding cattle as Graham Kennedy (channel 9 entertainer) and Peter Russell Clark (chef).  Of all the cattle they bred he said Dunmore Hansa and is dam Sundowner Ranches Evelyn were so loved that they were buried at the entrance gates to the Stud.  He said Wendy loved Hansa so much that she kept his hide to this day.  I spoke with one of the cattle handlers some years ago,  he bought Evelyn off the plane in Sydney, he said she was stalled not far from the airport and that she was a heifer you would never forget.  He said she was the first Simmental exhibited at Royal Sydney and that the Judge could not fault her.

Harry wrote an autobiography and in it he speaks of planning his own celebration of life.  He would like people to meet at the Capital Theatre in Sydney and have a drink, he said he would like to be cremated with the ashes thrown from his home at Wombarra, in true Harry fashion, the ashes are to be thrown  “Over the cliff”  He said he organised his own funeral because “I don’t want anyone to fuck it up”  Confessions of a not so secret Agent.  Harry M. Miller.

I appreciated the time Harry took to speak with me in his Sydney office, when I asked if he would like to go back into the cattle business, he gave a laugh…..only the strong survive in farming !

There are many pages to man Harry M Miller.  There are many stories to tell, and many to surface. An amazing life with an amazing contribution unmatched in the cattle industry for Australia and the world.

Thoughts for Wendy and Simmone.

“Om mani padme hum”       There are special songs to remind us of you and a Simmental Register to show the glory. 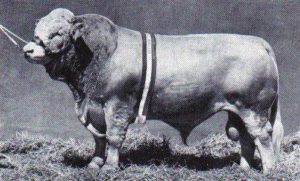 Champion bull Dunmore Hansa  (fullblood) sired by Ulan out of Sundowner Ranches Evelyn.  Ten-Rose International Simmental Fleckvieh at the Langton Gate (Peter Howarth) Dispersal sale (20.05.2005) purchased the last 10 Ai International straws of Hansa for $1,000 each. The Ai straws are so valuable now that the Stud would never sell them.  Hansa is an undefeated Royal Show Champion. 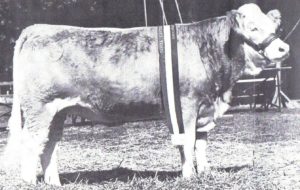