Long time Simmental breeder (Alec) Alexander Jeffrey MacDonald of Coolabar Park Simmental Drouin West passed quietly at home on Thursday 26th March 2020. I had the good fortune to meet Alec many years ago.  Alec was the sort of cattleman that near enough was not good enough, it had to be the best.  This approach extended to all aspects of Alec’s life.  Alec was born in Gippsland, grew up around Catani riding his pony to school, and married Glenys, a teacher from Poowong.  They met at a dance at Pakenham, lived in Drouin for 6 years whilst Alec saved for the farm.  He was never happy living in Town and always had the urge to farm.  They had three daughters Amanda, Samantha and Stacey.  Alec was a builder by trade and built a sound superb home atop the land at Drouin South.  The property overlooked his land that went gently down to a creek, providing summer feed on the river flats. The rolling hills had no obstruction from anything.

I met Alec at a time when he had two of his most famous cows, Christa and Coonawarra J008.  Christa was imported from Germany by Don Mathieson of Brenair Park.  Don at the time bought in near 40 head of fullblood German females.  J008 was a remarkable female from a line going back to one of Harry M Millers superb females. Both these females lived to 20 years of age.  Sound. I will never forget the quality of these cattle.  both Christa and J008 had beautiful faces, tremendous body and moderate.

The favourite bull that Alec loved was Siegfried.  Hard to get at the time.  Alec used Siegfried over both Christa and J008 gaining the best genetics that would breed on for him ever. He did many flushes of the line as they were predictable.   Photo shown is Coolabar Park Charlotte who was sired by Siegfried out of Coonawarra J008.  Living to a phenomenal age of 20. Perfect feet and udder.  J008 was the most remarkable female to walk the paddocks at Coolabar Park. The photo is of an aged cow, over Winter, and we can see the perfection in the image.  The full brother is Coolabar Park Radar shown below. Frame 7.5 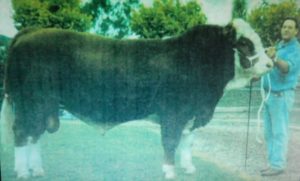 Alec never trimmed feet, if they did not have good feet at 18 months, they were out of the herd. If they did not attain the weight that he required, they were not included in his next season breeding program. Both Christa and J008 had record weights of 1.9 and 1.8kg per day on grass, as did their progeny.  The cattle had to perform on grass.

In the Show ring Alec did particularly well, attaining Interbreed and many champion ribbons.  His heart lay with grass feeding and performance though.

From Simmental Victoria site Peter and Vanessa Wenn added some of the base females that Alec began breeding with. The Simmental females were Bob Cook’s Mornington Peninsula Boolaroo Kirsten sired by Extra out or Richmond Freda ET a female carrying Scottish Herod and Scottish Neff.  The next female was Keith Lukey Phillip Island Lynhome Duchess 5th sired by Extra out of Southern Duchess, a powerful bodied female.  Alec took out Best Exhibit one year at the Royal Melbourne Show and Interbreed I understand with Coolabar Park Angelica sired by Switz Pol Senor Rojo out of Lynhome Karin. Peter and Vanessa talk about the huge amount of work that Alec did at the Field Days promoting Simmental.

Alec helped me many times with information on the cattle.  I purchased two females from him when I began breeding Simmental Fleckvieh.  They produced the calves that topped the local market for weight for age, on grass.  He helped me transport cattle when I was in need for someone to help out quickly, he lent me all his collection of Simmental, and all his Ai pamphlets on the imported sires. I remain grateful for his lessons.

What I noticed on the Ai sires list, were the weights and performance that he carefully worked out.

We have lost a man with high standards, not only in Simmental Fleckvieh cattle, but someone who had high standards in all areas of his life.  It had to be the best, or not at all. Anyone not doing the right thing with Alec would be forever known as “A Jungle Rat.”  Alec was a kind man, and that is what stood out with him.  Kind to his family and to others.

Many of us have great memories of Alec, the long conversations about Simmental Fleckvieh, their multitude of use, the sitting at the table overlooking the cattle whilst having a cup of tea and cake. The farm walks around the paddock and the superb cattle.   All with that touch of Siegfried in them. Alec bred over 650 Registered Stud cattle, with hundreds more not on the Register.  A crack shot he represented Australia in many of the Shooting Events.  He flew large model air planes and kept bees, among other farming activity.  HIs pride was his shed and he would be found dabbling around making or repairing anything.

The embryos and Ai of the genetics, have gone home to Don Mathieson, Brenair Park Drysdale.  It is the bulls sired by Siegfried out of J008 that you now see on video on Don’s  Face Book Page.  The muscle and the performance is second to none.  The Brenair Park Christa lines, carry the original Christa that Alec had, which Don bought into Australia all those years ago. They have gone full circle.

The genetics are timeless. They transcend time, because they are cattle that would work in 10 years, or 1000 years and Alec saw that in both Christa and J008. Two fullblood females of ability, and that was his gift, that he knew cattle.

Thoughts for Glenys and family.  Arrangements finalized for Friday 3rd April 2020 at Nielsen s Chapel Warragul.  This service will be online from 2pm Friday.  Livestreamed.